Who knew that photography umbrellas would be a good option as a video mapping surface. As it turns out, they are perfect. This project started as an experiment with lighting options for my 2018 open house studio works series. I had just installed a semi-permanent black backdrop in my studio and wanted a projection surface in front of it as a contrast to it. I had also just mounted a couple of umbrellas onto some heavy duty lighting tripods which gave me ideas of how to use them beyond their typical purposes.

After setting up a test installation, I played around with the surrounding lighting levels and different combinations of motion graphics and color options. This inspired a few more ideas for content so I knew it was worth pursuing as a major installation.

The original structure that supported the umbrellas utilized three lighting stands and was only meant for experimentation so a new structure needed to be designed. The new design only required two stands and utilized cross supports enabling the structure to be moved around a bit in order to access the ceiling fixtures and wiring. After final placement, the mapping process could begin.

The next step was to design lighting and motion graphics options and lighting sequences for everything. The two top umbrellas we’re translucent and thus perfect for illuminating from both the front and from behind. After experimenting with a few fixtures I noticed that some would create a somewhat holographic effect. Others worked perfectly to create small moving dot patterns and yet another gave a full range of color options. I knew that each fixture could be used along with specific projected graphics to create a unique experience.

The Eyes, They Watch…

For a major portion of the content, I took inspiration from my most recent project for the Gene Siskel Film Center, which included a simple animation of the eyes of classic film stars. This idea was perfect to reuse for projection onto the umbrellas. But since I had three surfaces arranged as a triangle, I used not just eyes, but also mouths.

For some of the compositions various animal facial features were also added into the mix or combinations of animal and human elements. Hollyweird paired different left and right combinations creating some rather unsettling mixes.

The facial animations only required simple fade transitions between the different sets and that process is detailed in the Clipped Contents Article.

Because the projector being used emitted 3000 lumens, it was possible to illuminate the black backdrop as long as only certain colors were used and ambient lighting was kept under a certain threshold. The projector was positioned approximately 25 feet from the backdrop so it’s throw would cover the backdrop entirely. Some of the compositions took advantage of this large area, which was floor-to-ceiling and wall-to-wall. Masks were created in MadMapper to keep the umbrellas and support structure from being illuminated by the background graphics. 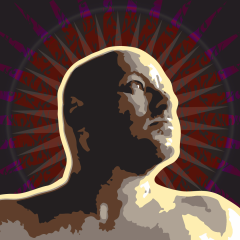 View all posts by Troy Larsen
Skip back to main navigation